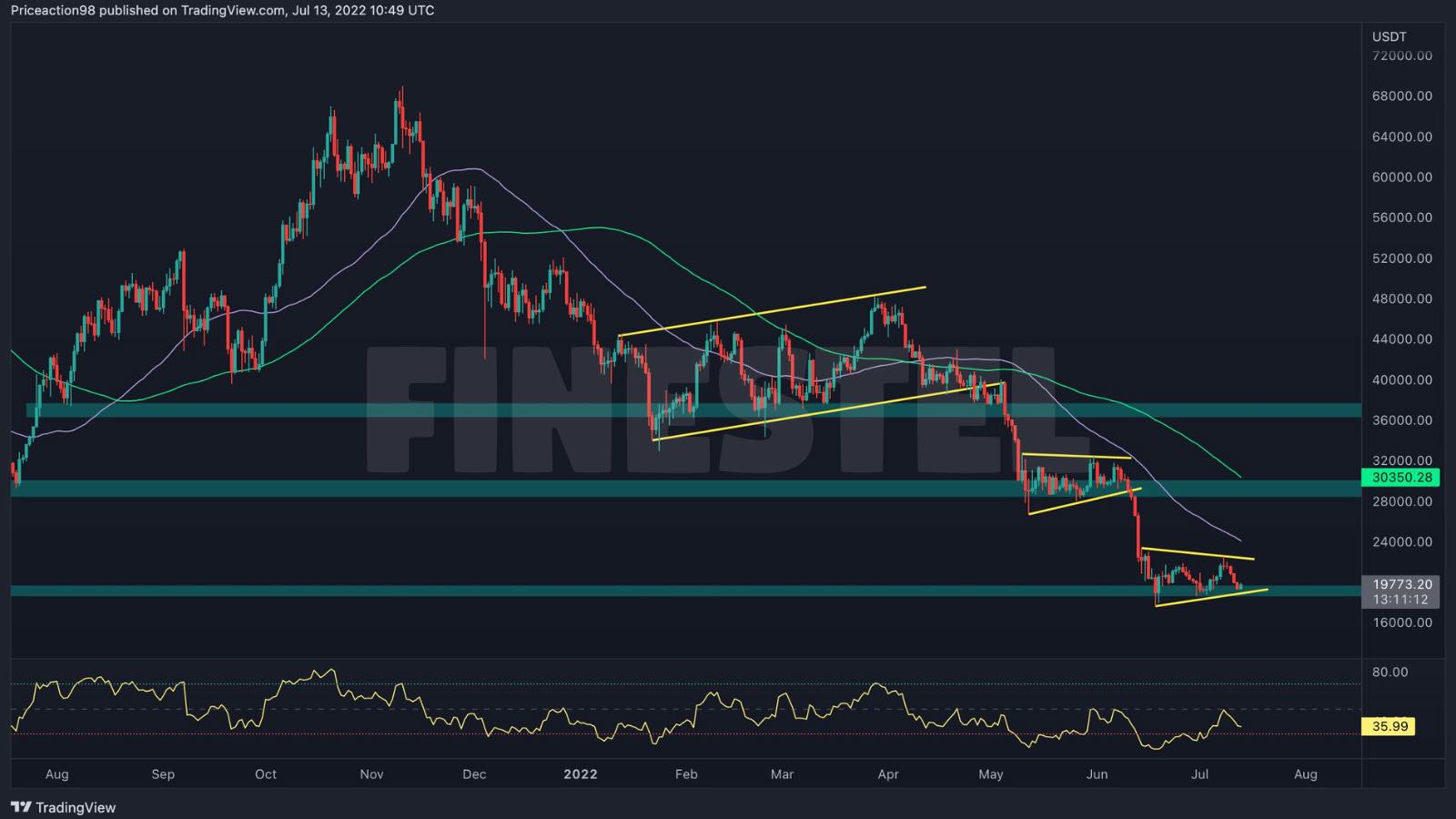 There are no signs of strength or rebound in Bitcoin’s price while the cryptocurrency has been experiencing choppy price action alongside low volatility. The price is slightly plummeting to retest the demand zone at $18K after a short-term rally towards the $21K mark. Additionally, this zone aligns with the 2017 peak and offers psychological support.

Nevertheless, the 50-day and 100-day moving averages alongside the $30K level are the main obstacles in Bitcoin’s path to reverse the bearish trend and initiating the next major bull run. 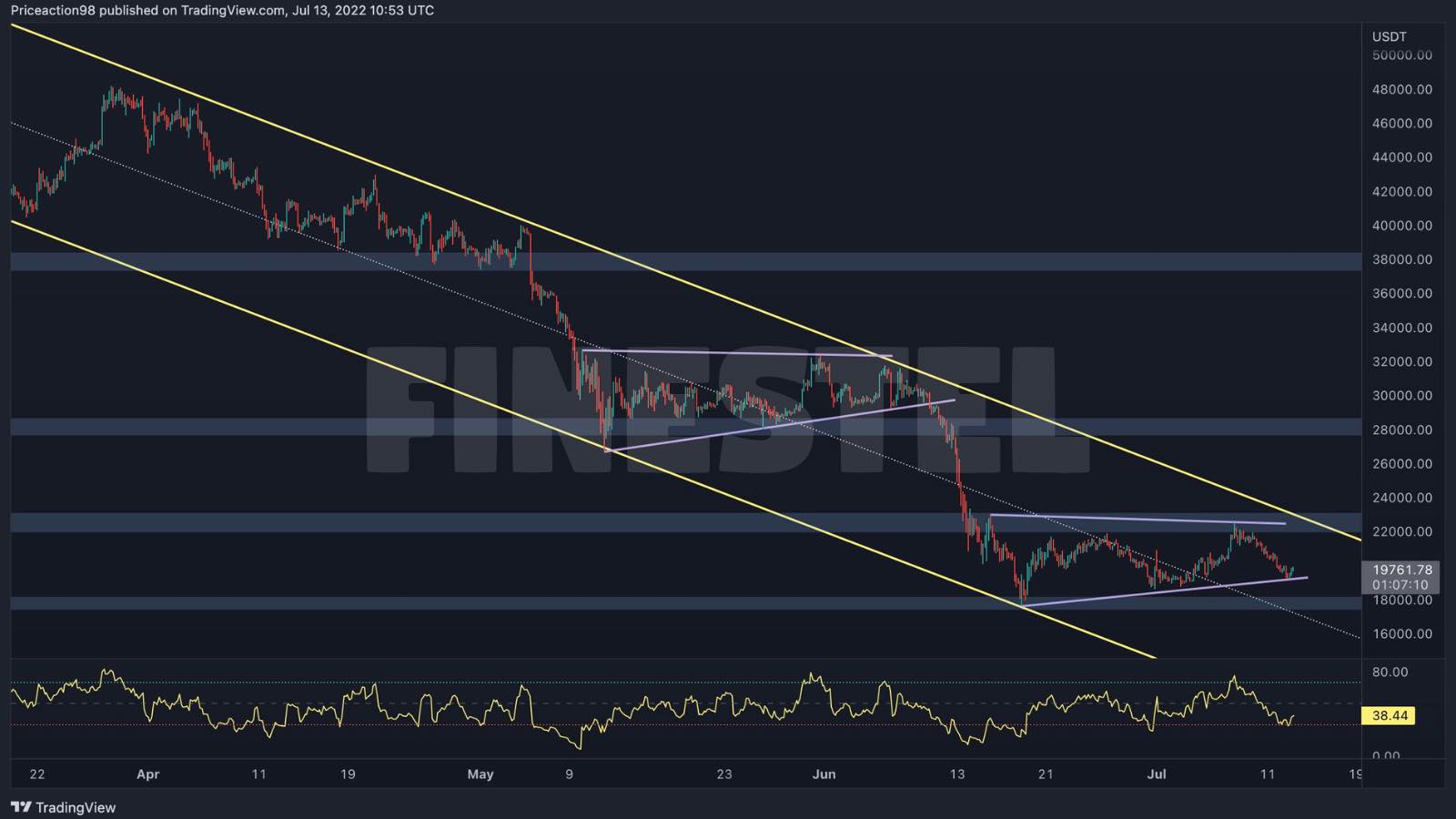 Bitcoin has been plummeting inside a sharp descending channel and consolidating after testing the lower boundary for the third time. During the consolidation phase, the price has formed a well-known continuation pattern called a ‘wedge’ and reached the lower trendline.

Remember that the wedge pattern could turn into a continuation or a reversal pattern, depending on whether the price breaks to the upside or the downside. Hence, if the trendline fails to support the price, a new short-term rally towards the $16K mark would be possible. In contrast, if the mentioned trendline supports the price, Bitcoin’s next destination will be the channel’s upper boundary and the $22K significant resistance level.

Given the overall financial markets’ condition and the current bearish sentiment in the crypto market, a lengthy consolidation followed by a new bearish rally will be the most probable scenario for Bitcoin. 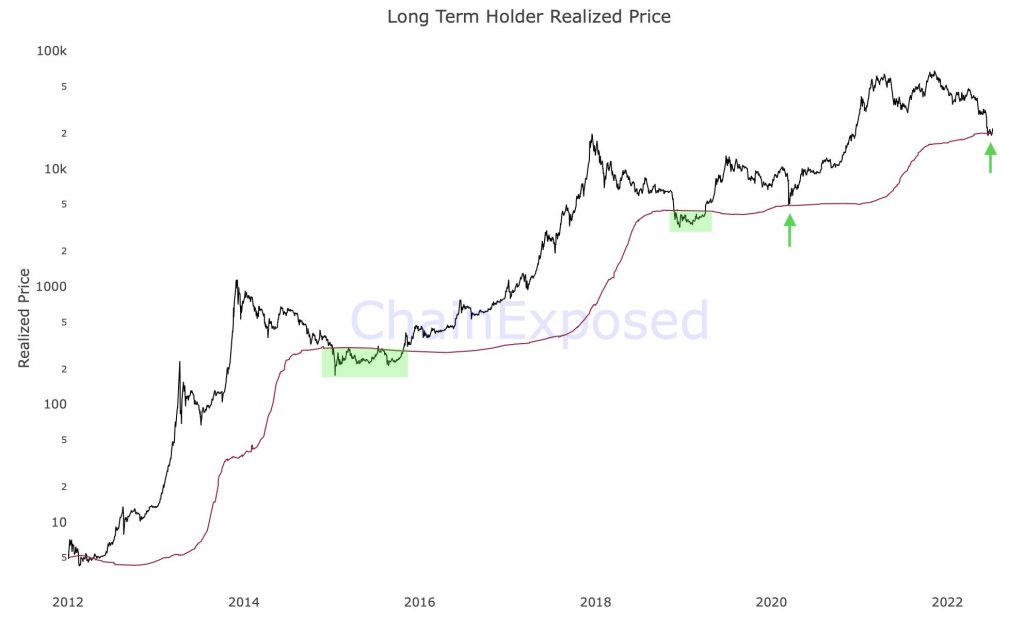 The following chart demonstrates Bitcoin’s Long Term Holder Realized Price alongside its price. LTH realized price measures the average price weighted by the supply of what the long-term holders paid for their coins. It is interpreted as the on-chain support or resistance price.

Historically, a bear market’s bottom has usually formed as the market experiences extreme fear. All market participants enter a capitulation phase, and the weaker hands tend to realize massive losses. However, the whales and long-term holders, players with significant assets and more risk tolerance, are usually the last cohort to enter the losing territory. This stage would mark the final phase of the bear market.

As shown in the following chart, Bitcoin’s price has exceeded the LTH realized price for the third time in its history, indicating that by dropping more than 70% from the $69K all-time high, the long-term holders are now in an aggregate loss. In conclusion, there is a high probability that Bitcoin is close to marking a long-term bottom,  as the entire market in total is in an unrealized loss territory which happens extremely rarely.