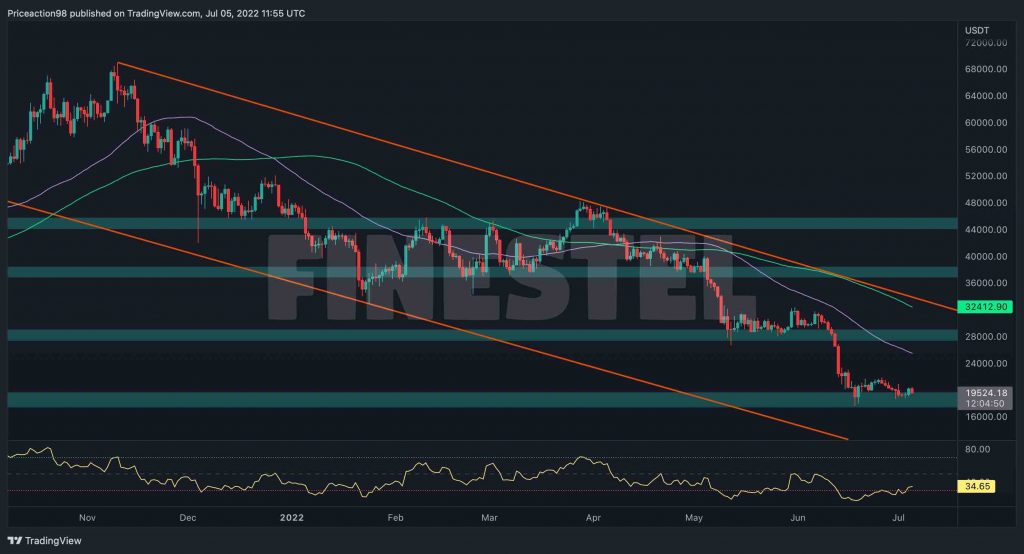 After a slight recovery from the $18.7K mark a few days ago, Bitcoin’s price is now slowly drifting. The cryptocurrency, however, is still unable to demonstrate any evidence of strength or reversal patterns.

As the chart represents, The price has been generating lower lows and lower highs which is a clear indication of a strong bear market. However, the price hasn’t yet been able to form a new higher high price action pattern in the daily timeframe. Therefore, a rebound and a fresh bullish rally cannot be anticipated until Bitcoin’s price develops a reversal pattern and records a new major higher high above the $32K key level.

On the other hand, a protracted market range and consolidation ultimately result in another bearish move to the important $16.6K level is more plausible given the increasing pessimism and lack of demand in the market. 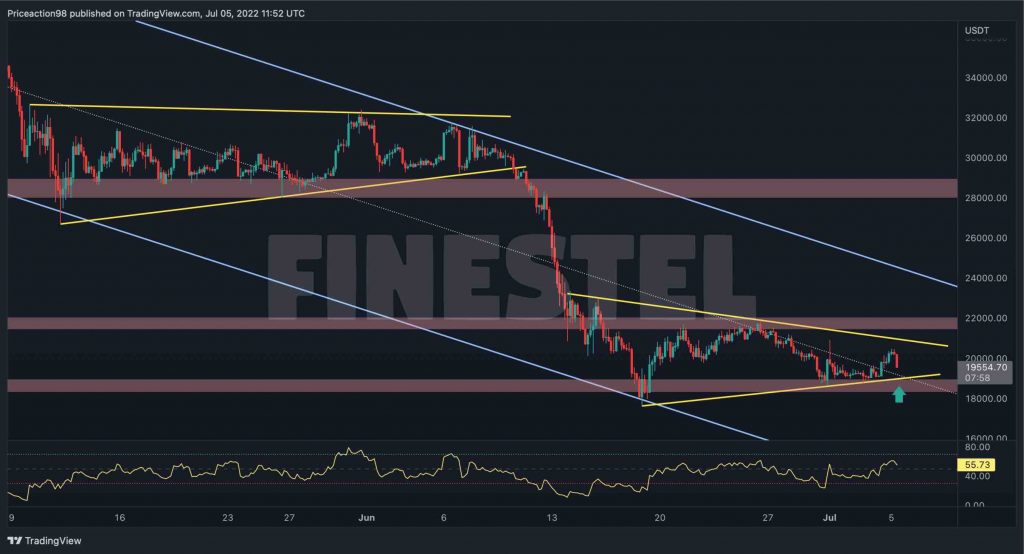 Over the past few weeks, the $18K level has been a major support for Bitcoin. Presently, the lower boundary of the triangle and the mentioned level have successfully pushed the price to break the channel’s middle trendline.

The price has been rejected after exceeding the mid-trendline of the channel and failing to test the upper trendline of the triangle. However, the most recent shakeout may be seen as a pullback to the broken boundary. If Bitcoin successfully forms the pullback, a surge followed by the breakout of the triangle will be expected.

However, if the triangle pattern and the $18K significant support level fail to support the price, a bloodbath will instantly occur and lower price regions will be inevitable to be tested. In this instance, the triangular pattern is recognized as a continuation correction pattern for the main bearish leg.

The Whale Ratio metric is a proxy of big players’ selling behavior and pressure in each market condition. It is calculated by dividing bitcoin’s top 10 inflows to exchanges by all the inflows in a single day. Historically, high values of the whale ratio metric have led to price fluctuations.

Since Bitcoin failed to break the $48K level(a manifest bull trap) and started a bloodbath dropping to the 2017 ATH, the Whale Ratio has spiked many times, acting as a catalyst for the bearish run. In this situation, it is concluded that the whales are depositing BTC to exchanges rapidly, resulting in increased selling pressure.

Nevertheless, when big players start to capitulate and realize massive losses, Bitcoin is likely to find a bottom for the next bullish cycle.