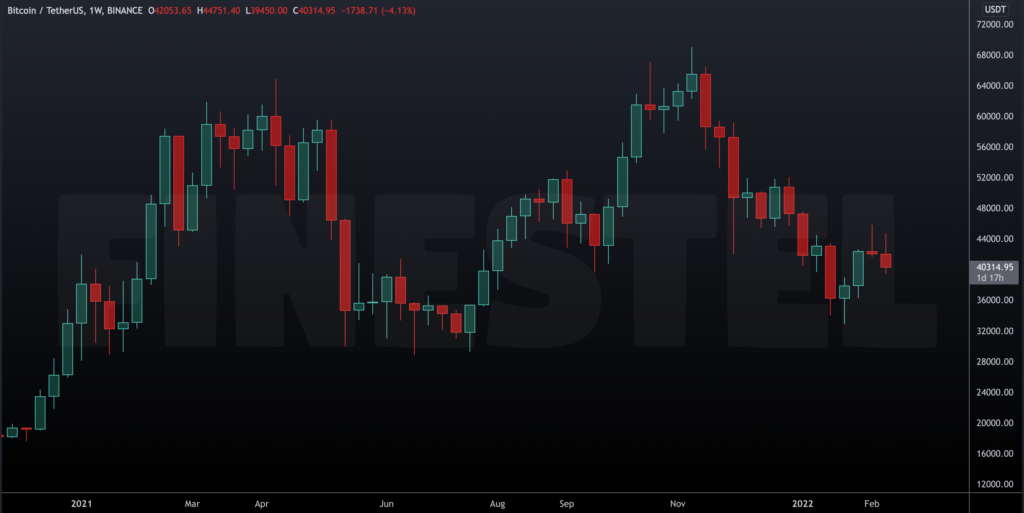 Despite the reasonably optimistic technical structure in the short-term view and early signs of bullish sentiment in the futures market, macro factors continue to be a cause of uncertainty. Let us check the recent news:

-Berkshire Hathaway, led by Warren Buffett, sold a portion of its Visa and Mastercard shares and boosted its exposure in Nubank, Brazil’s largest fintech bank and a favorite among Bitcoin investors. The industrial conglomerate reported in a regulatory filing late Feb. 14 that it had bought $1 billion in Nubank Class A stock in Q4/2021. On the other hand, it sold $1.8 billion in Visa shares and $1.3 billion in Mastercard stock, indicating a shift away from credit companies in favor of fintech rivals.

-The “virtual assets” bill is expected to become law in Ukraine after months of debate and a presidential veto. Ukraine’s Parliament is said to have adopted a revised bill regulating cryptocurrency on Tuesday. The move is part of the country’s ongoing efforts to attract crypto investment and expertise. The revised law includes President Zelensky’s modifications, which he submitted back to Parliament in October. According to the Ministry of Digital Transformation, the new law would allow Ukrainians to record revenue from digital assets.

-With new research and some bold forecasts, Wall Street investment firm JPMorgan is the latest big name to proclaim its intentions for the Metaverse. This week, JPMorgan Chase released research titled “Opportunities in the Metaverse,” which digs into virtual worlds and the almost limitless possibilities the bank sees in them. Companies large and small are entering the Metaverse, according to the international investment bank, which estimates that $54 billion is spent on virtual products each year, nearly double the amount spent on music. The organization predicted that in the next five years, the Metaverse would be all-encompassing and would become a trillion-dollar market.

-Even though Binance has suspended operations in countries such as Israel due to licensing issues, the world’s largest cryptocurrency exchange by trading volume continues to deepen ties with Russia. Binance announced its membership in the Russian Association of Banks on Thursday, to facilitate communication with local authorities, parliamentarians, and cryptocurrency professionals.

-The chairman of the Securities and Exchange Commission, Gary Gensler, has reacted to a letter from legislators calling the SEC’s denial of Bitcoin spot exchange-traded funds clearance “unacceptable.” In a letter to Minnesota Representative Tom Emmer on Tuesday, SEC Chair Gary Gensler signaled that the regulatory body was no closer to authorizing a Bitcoin (BTC) spot ETF capable of avoiding “fraudulent and manipulative acts and practices” under the Exchange Act’s criteria. Gensler restated his stance as a technology-agnostic but said he would  “carefully consider” the concerns voiced by Emmer in November.

-While the Russian government continues to develop a legislative framework for digital assets, another suggestion for the crypto mining business has been made by a federal agency. According to local news source Izvestia, Russia’s Ministry of Economic Development has approved the idea of crypto mining regulation in the nation, proposing to allow mining activities in locations with “sustainable excess in power generation.”

-During the Super Bowl, Coinbase’s marketing campaign was so successful that the exchange went down. The problem was quickly resolved. During the important sporting event, Super Bowl, the top bitcoin exchange in the United States marketed itself. Surojit Chatterjee, Chief Product Officer, said the marketing strategy resulted in “more traffic than we’ve ever witnessed,” temporarily disrupting operations. Nonetheless, he guaranteed that everything would be brought under control immediately.

-Elvira Nabiullina, Anton Siluanov, and Dmitry Grigorenko couldn’t agree on how to handle the cryptocurrency sector. Despite Vladimir Putin’s request, the Bank of Russia and the Ministry of Finance were unable to reach an agreement on cryptocurrency legislation. While some rumors claim that the world’s largest country would not prohibit the use of digital assets, it is unclear what regulations it will enact.

-Federal Reserve officials will be unable to trade stocks, bonds, or cryptocurrencies as of May 1st. The governing Federal Open Market Committee has modified the paper to include cryptocurrencies just months after submitting the original draft aimed at prohibiting Fed officials from owning specific assets.

-Circle plans to go public by December this year, with a market capitalization of $9 billion, up 100% since July 2021. Circle Internet Financial is a financial services corporation best known for issuing USDC, the second-largest stablecoin in terms of total market value. The corporation is now valued at $9 billion, according to reports.

After a steady increase from last July’s lows, the Bitcoin network has reached yet another all-time high in mining difficulty. Mining difficulty reached a new record of 27.97 trillion hashes on Friday, according to CryptoQuant.com data. Bitcoin has already reached a new all-time high (ATH) in terms of difficulty for the second time in three weeks. When hash rates were 190.71 Exahashes per second (EH/s) on Jan. 23, difficulty hit 26.7 trillion. The higher the difficulty, the more miners compete to confirm a block and extract a block reward. Miners have recently begun selling coins or shares in their companies to maintain their cash reserves.

Marathon Digital Holdings, for example, filed on Saturday to sell $750 million worth of company stock. According to statistics from CryptoQuant.com, the network’s hash rate has also reached a new high, with a hash rate of 248 EH/s. 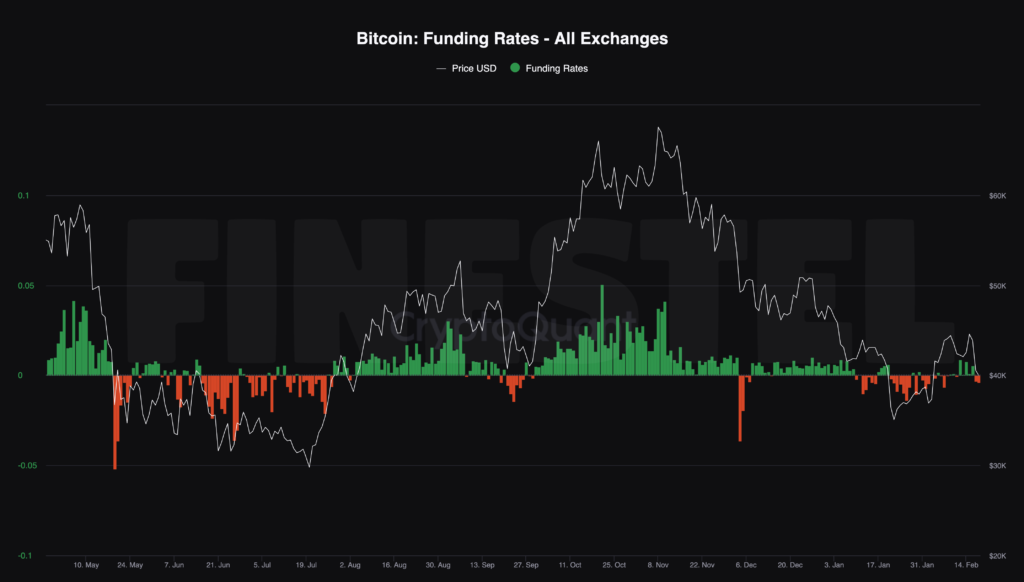 After a period of negative values, funding rates have recently become positive. This confidence looks unreasonable, given the possibility of a conflict between Russia and Ukraine, as well as speculation that the Fed may raise rates by 50 basis points instead of 25.

Furthermore, many bears who were liquidated during the recent surge to $45,000 contributed significantly to painting the funding rates green. In the near term, however, the market dropped again, liquidating the impatient bulls and over-leveraged speculators. As a result of the concern of another significant decrease in the price of Bitcoin, Funding Rates have become negative once more.

As previously said, the recent strong rise towards $45,000 has re-established positive optimism in the market. As a result, several players experienced FOMO and began to establish high-leverage long positions. On the other hand, the price has been rejected from the $45,000 level once more and has dropped by 12% in the last three days. This resulted in another round of enormous long liquidations. In addition to the liquidation, we identified the $41K-$42K zone as a support based on price action patterns, implying that many stop losses were placed below this level. As a result, BTC’s breaching below this level caused a flood of stop losses, accelerating the negative trend.

The price was rejected from the multi-month resistance descending trendline (blue line) and finally, on Feb. 17, Bitcoin fell below its moving averages (50 and 20-day moving averages), indicating that bears aren’t prepared to give up and are selling on rallies. The price, on the other hand, failed to create a higher high in the daily period, which was required for the reversal scenario to work. BTC is currently trading above the $38K-$39K support level as well as the rising trendline (yellow line), indicating two possible scenarios for the next move: 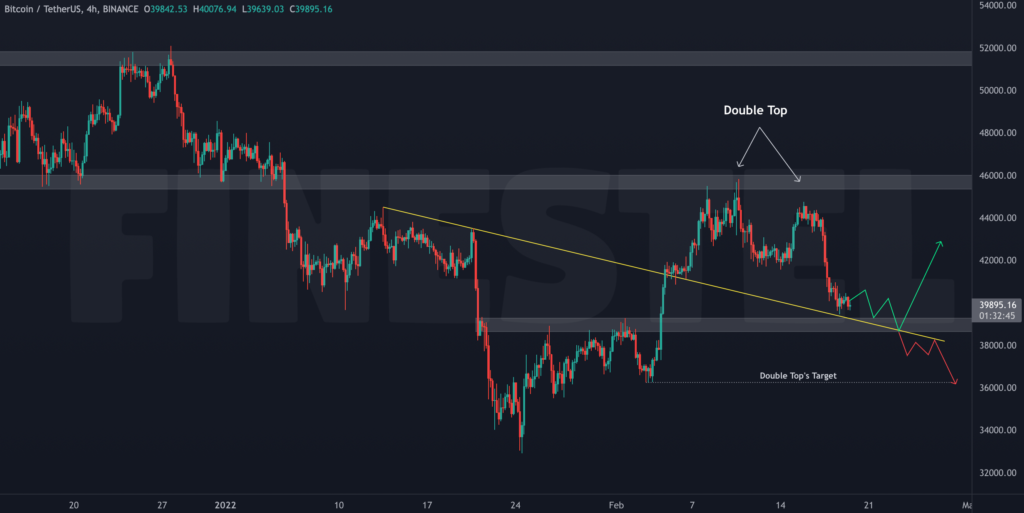 Since creating a double top price action pattern in the 4-hour time frame, the price has been falling. It’s also above a $38,500-$39,200 support zone and an upward trendline (yellow line). One possibility is that the defined supports will fail, causing lower price levels to be reached to achieve the double top’s target. However, there’s a strong chance bitcoin will find support at present levels and surge back to $45K.