While all of the network’s essential features are setting new records, the cryptocurrency market is crashing. The asset dropped $5,000 in only hours, to a little over $35,000, a six-month low. Let us check this week’s news:

-Late Thursday evening, bitcoin (BTC) and ether (ETH) broke through crucial support levels of $40,000 and $3,000, respectively, sending the altcoin market into rapid collapse. According to CoinGecko statistics, the cryptocurrency industry’s entire market worth decreased 11% to $1.9 trillion on Friday afternoon during US trading hours, down from an all-time high of $3.1 trillion in November.

-El Salvador, a Central American country, has added 410 Bitcoin (BTC) to its monetary system as BTC values fall below $37,000, the lowest point since July 26th, 2021. President Nayib Bukele revealed the latest contribution to El Salvador’s BTC reserve, confirming that 410 BTC were purchased for $15 million, putting the price per BTC at around $36,585.

-New York City Mayor Eric Adams said on Thursday that he would receive his first paycheck in Bitcoin (BTC) and Ether (ETH) on Friday. The payment will not be made in crypto directly; instead, it will be issued in fiat currency, such as US dollars, and subsequently converted to digital currencies on Coinbase. Residents of the United States are unable to receive their salary in cryptocurrency due to laws imposed by the United States Department of Labor and several state governments.

-After repeated deferments, the Securities and Exchange Commission, or SEC, has finally denied First Trust SkyBridge’s spot Bitcoin exchange-traded fund application. In a Thursday filing, the SEC denied a proposal by the New York Stock Exchange, or NYSE, Arca, to list and trade shares of the First Trust SkyBridge Bitcoin ETF Trust. Any regulation modification in favor of the ETF would not be “designed to prevent fraudulent and manipulative acts and practices,” according to the SEC, nor would it “protect investors and the public interest.”

-Despite the fact that the value of Bitcoin (BTC) has dropped by 40%, MicroStrategy’s Michael Saylor has no plans to sell his $5 billion holdings. Even if BTC has a prolonged bear market, Saylor told Bloomberg that he is a “Bitcoin bull” and that MicroStrategy’s multibillion-dollar BTC acquisition strategy would not be altered. He was adamant about not cashing out BTC: “Never. No. We’re not sellers. We’re only acquiring and holding Bitcoin, right? That’s our strategy.”

-Twitter has added a function that allows users to formally validate the NFTs they use for their profile images. Previously, anybody could right-click and copy a picture, and there was no way to prove ownership without checking the Ethereum blockchain. Only paying customers of Twitter’s Blue service have access to the functionality, which was launched on January 20. Instead of the conventional circle border used for profile photographs, official NFTs will have a hexagonal border.

-An official from Iran’s Central Bank said that the pilot phase of the country’s digital currency initiative will begin shortly. The Islamic Republic aims to join a growing group of countries that wish to benefit from having their own currency, as well as implementing blockchain technology in other sectors.

Spent output profit ratio (SOPR) is a well-known on-chain metric that may map the “Capitulation” phase in the market. The short-term holders have been selling/moving their assets after Bitcoin registered a new high of $69,000 and got rejected afterward. During the recent bloody days of the market, short-term holders were panic selling their assets and realizing their losses. As you can see, the STH_SOPR metric has dropped to 0.95 during the shakeout, which is a perfect explanation for the “capitulation” event. 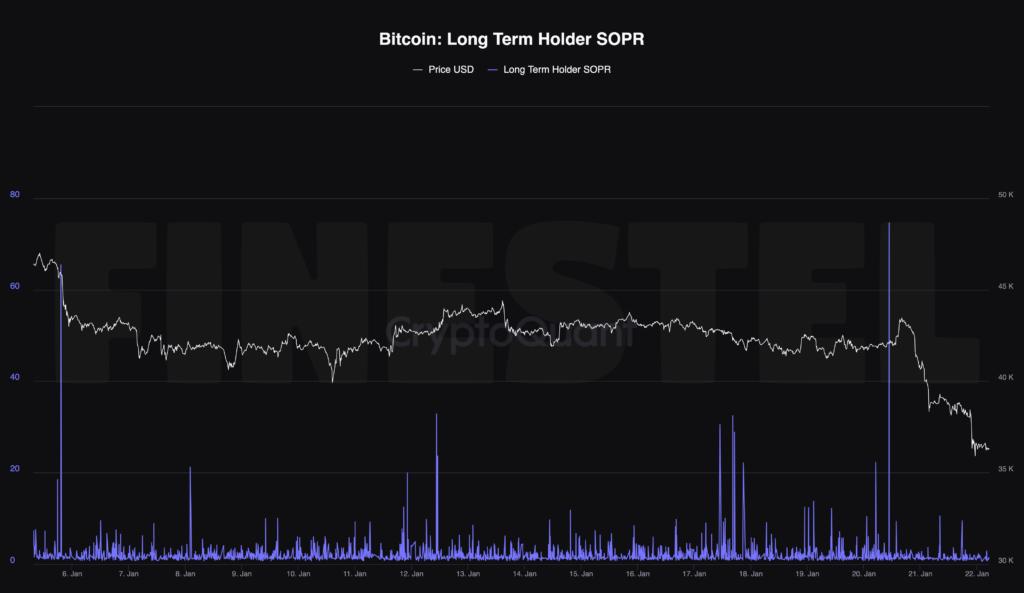 A key data change before the drop was LTH SOPR. The metric had spiked right before the price started to drop. This means that some long-term holders may have tried to sell BTC before the rejection. 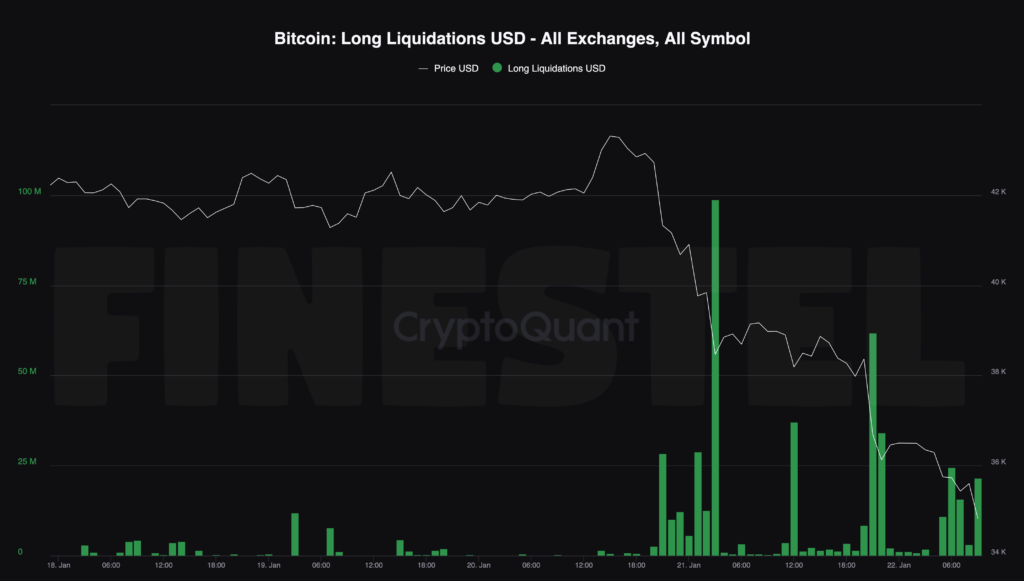 The price plunged over 18% last week. This has led to a massive liquidation in the futures market. Almost $300 million in long positions have been liquidated in the last two days, causing the price to fall. These liquidations are essential for the overheated futures market with a high estimated leverage ratio amounts to cool down and let the price start a healthy rally.

Many people trade in the futures market using a huge amount of leverage for their positions. This indicates an excessive propensity for risk and leverage in the market. Of course, when BTC is in a decline, this type of leverage rarely ends well. This gives whales and big players the opportunity to liquidate them by moving the market in the opposite direction and manipulating them. As mentioned before, the recent shakeout flushed out a huge amount of positions and caused a drop in the Open Interest.

However, the estimated leverage ratio is the most serious issue. Despite the price reduction, the Leverage Ratio remains extremely high. Normally, the Leverage Ratio falls when the market changes direction, but it has been steadily increasing since early December 2021. 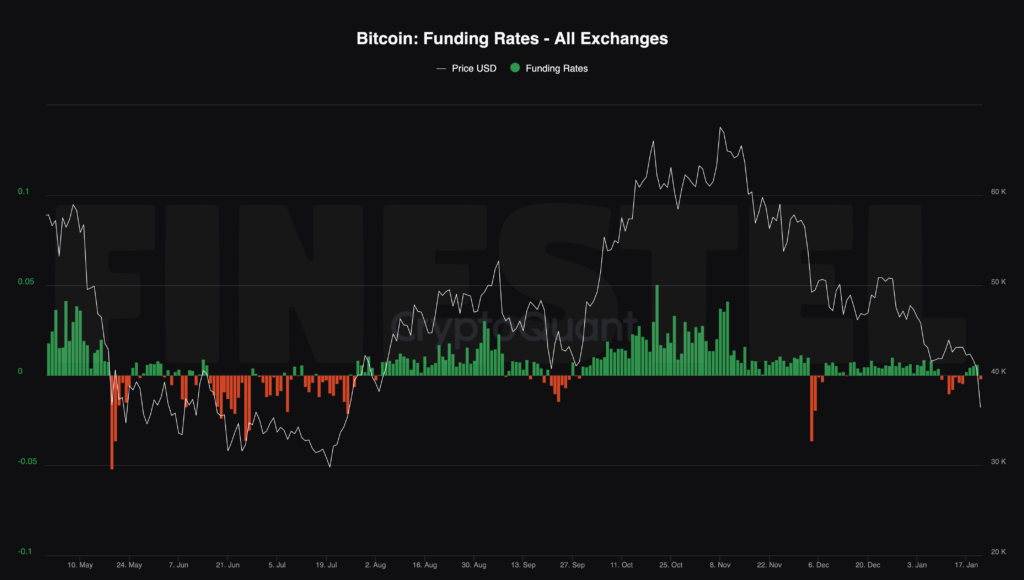 Despite the BTC continuing to plummet without a substantial comeback, the Funding Rate remains near zero. This indicates that many traders continue to believe in the bull market and are taking long bets. Compared to May-July 2021, we need more capitulation and more negative funding rates to confirm a likely bottom. 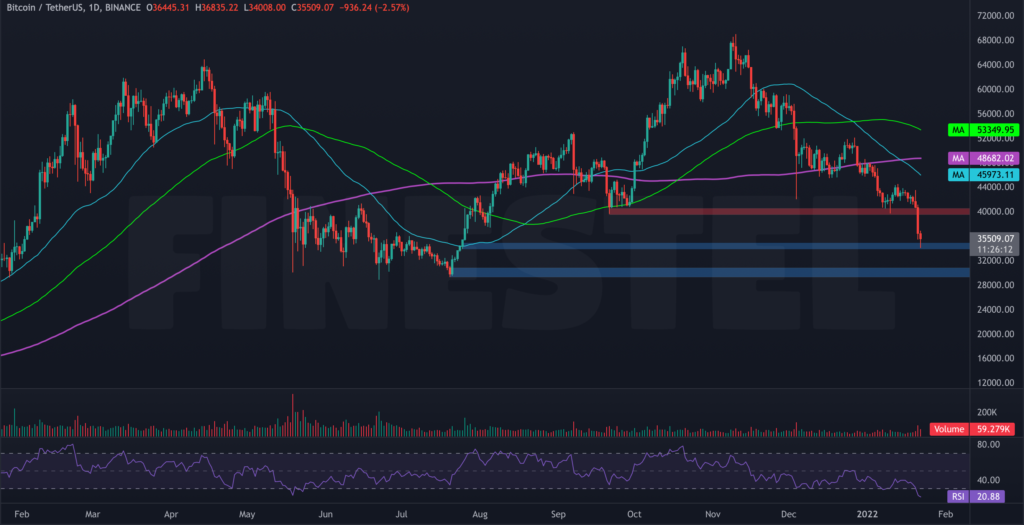 A major sell-off occurred in the last few days, forcing Bitcoin’s price to plummet to below $40,000. The onchain data shows that the market is in an extreme surrender phase, which was exacerbated by long-term holders immediately before the drop to $35,000.

Yesterday, Bitcoin lost a major support area of $37K-$40K. Before the price drop below $40K, both the 50-DMA and 100-DMA lines crossed the 200-DMA to the downside, signaling further negative momentum is on the way, as shown in the chart below.

The present price area of $35K is a possible support level, followed by $30K (lows of May – July 2021). On the other hand, the former support area ($40K) had turned into significant resistance if the price made a pullback from either of the two support areas mentioned. The daily RSI is also highly oversold, now at 20%, suggesting that a positive retreat is conceivable in the near future. 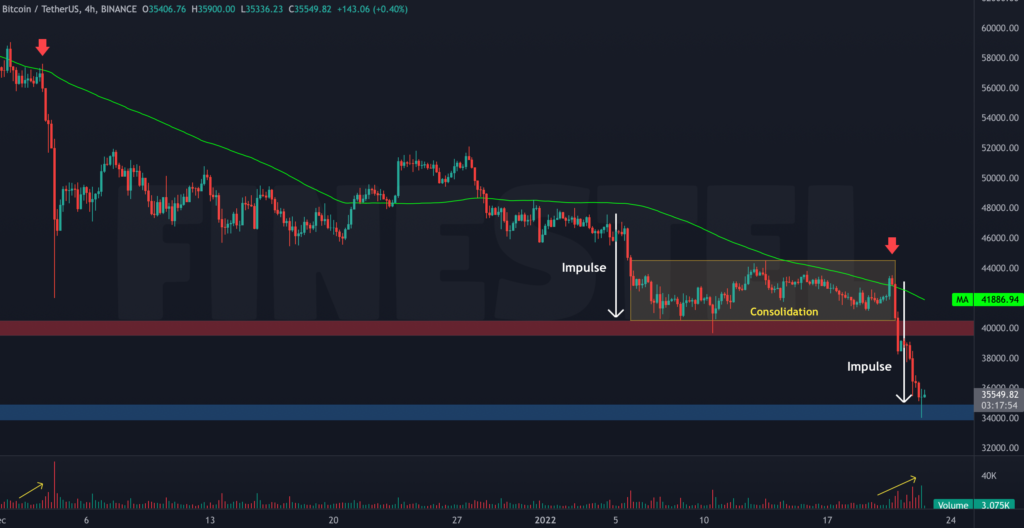 When looking at the price action during the last week of the 4-hour period, it’s clear that the price was in a strong downturn and was repeatedly rejected at the 100-MA. This time, the price plunged quickly from $48K to $40K, went through a consolidation period, and was rejected at the 100-MA once again. The second bearish leg down was prompted by this rejection. We may expect another phase of consolidation before the market determines its next path, given the significant increase in trading volume and the previous few candles near the $35k support. 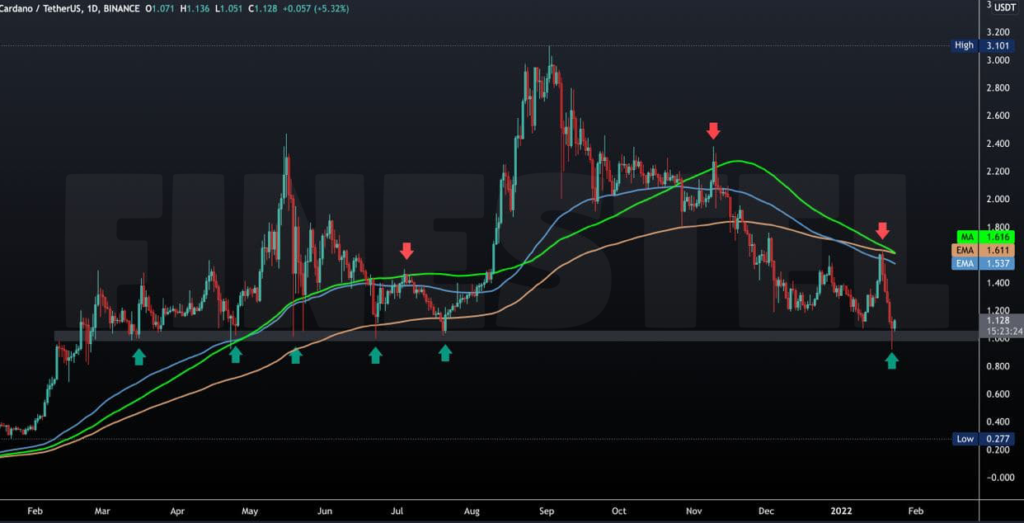 Regarding the recent sell-off that occurred in the last few days, ADA experienced a 44% drop after it had recovered and reached its 100D MA,100D EMA, and 200D EMA. Right now, Cardano is above a substantial support area which has been supporting the price since early 2021. Maintaining this support area is crucial for Cardano in order to gain some buying pressure and start a fresh bullish rally. 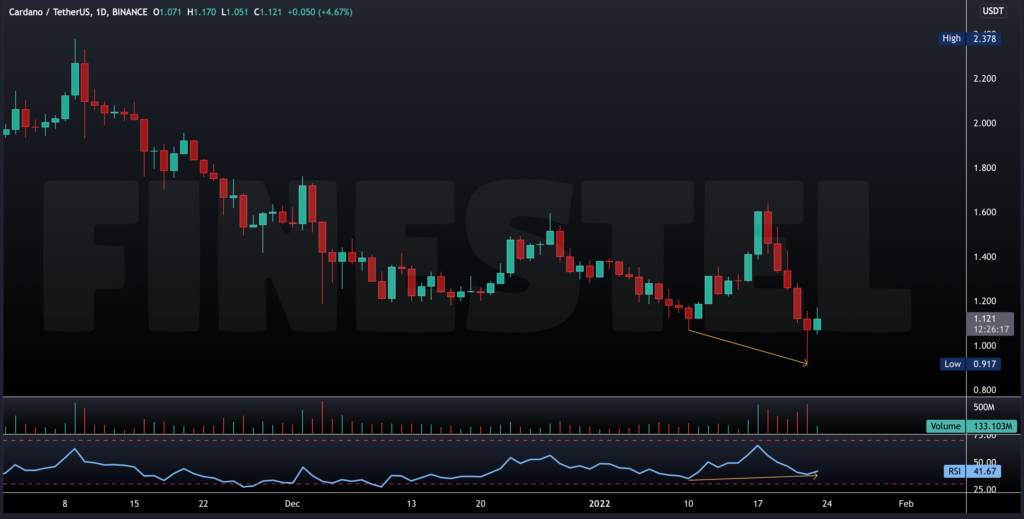 There are no significant support levels below $1 and if the mentioned zone breaks, we will have to expect lower prices for Cardano to meet. We can also see a bullish divergence between the price and the 28D RSI which considering the price action and the support zone, it may cause a rebound in the price.

As the chart represents, ADA has been in a strong downtrend after it registered the recent September ATH at $3.1. In the 4-hour time frame, Cardano has dropped to its prior major low but got supported from there in form of a wick. Again, ADA needs to be supported at this level and break the trendline in order to start a healthy rally. Considering the market condition, we may expect ADA to consolidate here for a while, and then it has to decide whether to break the support and give us a dip or get supported from here and Soares up to higher levels.