Bitcoin has had yet another terrible week, with a price loss of 11%. Bears appear to have taken control of the market and have no intention of letting it go. Let’s check the latest news :

-The Genesis Block, containing the first 50 bitcoins, was released into Sourceforge on January 3, 2009, by the mysterious and yet anonymous Satoshi Nakamoto. At the time, he also placed a note on the blockchain, referencing a headline from the Times newspaper in the United Kingdom: “The Times 03/Jan/2009 Chancellor on brink of second bailout for banks.”

Every year on January 3, the crypto community honors Bitcoin Genesis Day, which recalls the release of the first BTC block in 2009.

-PayPal Holdings, an American financial giant, has apparently announced its intention to establish its own stablecoin, PayPal Coin. Developer Steve Moser first spotted the construction of an in-house stablecoin in the source code of Paypal’s iPhone app. Jose Fernandez da Ponte, PayPal’s SVP of crypto and digital currencies, confirmed the evidence seen on the PayPal app to Bloomberg News: “We are exploring a stablecoin; if and when we seek to move forward, we will, of course, work closely with relevant regulators.”

-In a letter to clients on Friday, JPMorgan equities research analyst Kenneth Worthington predicted that mainstream investors and corporations will embrace bitcoin markets and industries this year.

2022, according to JPMorgan, has the potential to be “the year of the blockchain bridge (driving greater interoperability of various chains) or the year of financial tokenization.” Coinbase, a cryptocurrency exchange, is still rated as a buy by the investment bank.

In other news, the third-largest Bitcoin address has added another 551 BTC since Cointelegraph last reported it buying the dip this week. The wallet continues to rapidly accumulate around the $40 thousand zone, with 121,396 BTC (approximately $5 billion) already in its possession.

-The amount of Bitcoin (BTC) held by private firms surged dramatically in 2021, building on the previous year’s gains.  On-chain expert Willy Woo said in a Monday tweet that public businesses with “substantial BTC” had “gained market share from spot ETFs as a method to obtain BTC exposure on public equities markets.” Since MicroStrategy’s “Bitcoin for Corporations” conference on Feb. 3 and 4, 2021, this has been increasingly apparent. The goal of the online session was to discuss the legal implications for businesses looking to incorporate Bitcoin into their operations and reserves.

-Ray Dalio, a hedge fund manager, is still positive for Bitcoin (BTC) in 2022, citing three fundamental reasons why the cryptocurrency is “outstanding.” He mentioned gold and Bitcoin as inflation hedges in a recent discussion with The Investors Podcast.

He went on to say that the network has never been hacked, that it has no superior competition, and that BTC adoption rates indicate that it might continue to eat into gold’s market capitalization:

-Kazakhstan, the world’s second-largest nation in terms of Bitcoin (BTC) mining hash rate, suffered unprecedented political upheaval on Wednesday as a result of a sudden increase in fuel costs. The country’s ruling cabinet resigned as a consequence, but not before state-owned Kazakhtelecom shut down the country’s internet, causing network activity to plummet to 2% of daily highs.

The decision has severely harmed Bitcoin mining in the nation. The Bitcoin network’s total hash rate dropped 13.4% in the hours following the shutdown, from about 205,000 petahash per second (PH/s) to 177,330 PH/s, according to statistics provided by YCharts.com. The country is responsible for 18% of the hashing activity on the Bitcoin network.

The Estimated Leverage Ratio and Price are depicted in the chart below. It has risen to new highs not seen since last year. At the same time, the futures market’s outlook is practically neutral (the average funding rate is close to zero). It implies that price volatility is on the way as a result of the liquidation of high-leverage positions. As a result, the market may be in a range condition in the medium term.

Price volatility on January 4–5 resulted in a $300 million and $50 million liquidation event in the perpetual markets, respectively. Surprisingly, this large volume of liquidation has had no effect on the open interest in futures markets. As a result, we may anticipate increased volatility in the following days.

The high open interest in the Futures Market, which is mostly related to Binance, might be a concerning indicator. Despite the fact that the market has witnessed a lot of volatility in the last couple of weeks, Binance’s open interest has remained relatively stable. As a result, many experts are concerned about a quick drop to lower levels, flushing long positions. However, based on the funding rate and other data, it’s difficult to say if long positions constitute the majority.

One probable reason is that significant players are shorting the market to hedge themselves against a possible bearish market. As a result, traders may want to reduce their risk by avoiding large leveraged positions until the futures market begins to see an increase in open interest, as we did between May and July 2021. 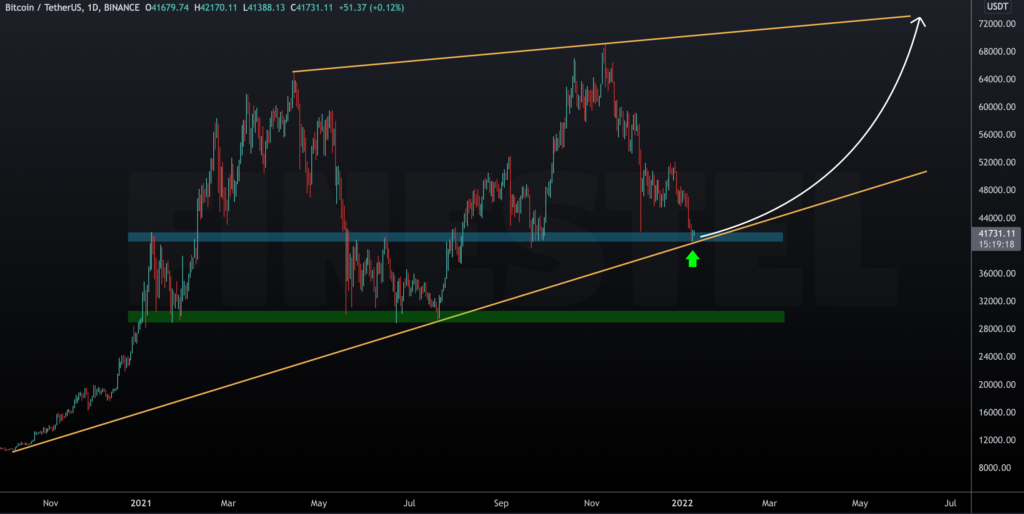 The BTC price fell to $40.5K after failing to close a daily candle above $48K on January 4 (Tuesday) and following the worldwide market crash. The price is now trading around a significant level (blue box), and whether it breaks above or below this level will decide the medium-term trend. If it will be supported by the blue zone, $73K isn’t too much out of reach. On a daily time frame, however, if the bears gain more strength, the price will revert to the lower base range (green) formed in the previous 12 months.

Overall, insufficient demand in spot markets might lead bitcoin to test lower levels, even in the shape of tails. The loss of the mid-term trendline and the 100-day EMA line triggered a negative signal (on December 3). Bitcoin must first settle above the 100-day EMA line in order to reestablish confidence in a midterm comeback.

As mentioned before, on the daily chart, BTC faces a crucial price level of $40-42K, which has served as both resistance and support in the last year. When this level is broken down, the intersection of static and dynamic support will most likely be found at $37K. Many analysts believe Bitcoin will revisit lower levels due to the Head & Shoulders pattern, a bearish pattern on an uptrend.