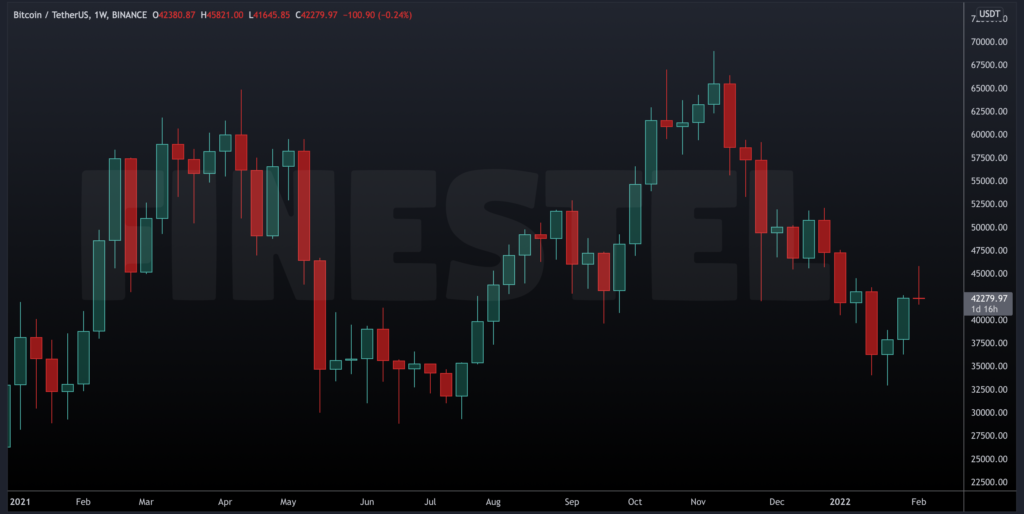 After dropping to $32K, BTC has finally bounced back, and spiked around 39%, recording a new local high of $45800. Let’s check the latest news:

– Apple has revealed plans to provide Tap to Pay on the iPhone, a new feature that transforms the smartphone into a point-of-sale device for companies and merchants. Apple Pay customers will be able to make crypto payments at regular retailers and companies using the iPhone’s Tap to Pay function.

– According to a Tuesday announcement, Russia’s government and central bank have achieved an agreement on how to regulate cryptocurrencies. Russia’s government and central bank are now working on a draft law that would classify cryptocurrency as an “analogue of currencies” rather than a digital financial asset, which will go live on February 18. Only comprehensive identification through the banking system or regulated intermediaries would allow cryptocurrencies to function in the legal business.

– According to official statistics, Elon Musk’s electric car company, Tesla, held around $2 billion in Bitcoin (BTC) by the end of 2021. According to Tesla’s annual filing with the US Securities and Exchange Commission on Friday, the “fair market value” of BTC owned by the corporation as of December 31, 2021, was $1.99 billion. According to the statement, Tesla liquidated a portion of its BTC holdings in March 2021, realizing $128 million in profits. Last February, the corporation announced a massive $1.5 billion BTC acquisition.

– On Friday, most cryptocurrencies fell as markets reacted to geopolitical risks posed by Russia and Ukraine. President Biden of the United States advised Americans to leave Ukraine immediately on Friday, saying that “an invasion might commence at any time.” Despite Russia’s military operations, the US has ruled out deploying soldiers into Ukraine for the time being.

-Raja M. Koduri, senior vice president of Intel’s accelerated computing systems and graphics group, announced on Friday that the company intends to contribute to the development of blockchain technology, beginning with the release of energy-efficient crypto mining accelerators later this year. Intel has previously stated that the next generation of Application-Specific Integrated Circuit mining equipment will be unveiled at the International Solid-State Circuits Conference later this month.

– Drake spends his time betting more than $1 million in Bitcoin (BTC) on Super Bowl matches. The award-winning rapper recently revealed that he has bet $1.26 million in BTC on the forthcoming Super Bowl match between the Cincinnati Bengals and the Los Angeles Rams.

– JPMorgan researchers stated that Bitcoin’s “fair value” is lower than its market price on Tuesday, despite the cryptocurrency’s substantial price rise since early February. According to JPMorgan analysts, the current fair-value threshold for BTC is roughly $38,000, according to the bank’s latest investor note issued on Tuesday. The strategists, led by JPMorgan crypto market analyst Nikolaos Panigirtzoglou, calculated the “fair value” based on Bitcoin’s volatility being roughly four times that of gold.

– According to a recent report, the world’s largest asset manager, BlackRock, aims to double down on its bitcoin participation by introducing such trading services. This comes a year after the corporation dabbled in bitcoin by trading it and declaring ownership of BTC mining stocks.

– The exchange-traded fund (ETF) Valkyrie Bitcoin Miners has been accepted for listing on the Nasdaq Stock Market under the ticker symbol “WGMI.” Nasdaq approved the Bitcoin Miners ETF from crypto asset management Valkyrie to be listed and traded on the market, according to a US Securities and Exchange Commission (SEC) filing on Monday (February 7, 2022).

– The world’s largest bitcoin exchange is expanding again, this time targeting Forbes, one of the most well-known publications and digital publishers. Binance has committed to spending $200 million in the century-old business to assist it in merging with a SPAC.

– The US Securities and Exchange Commission (SEC) has postponed a decision on Grayscale’s application for a Bitcoin (BTC) exchange-traded fund (ETF) yet again, citing concerns about manipulation, liquidity, and transparency. 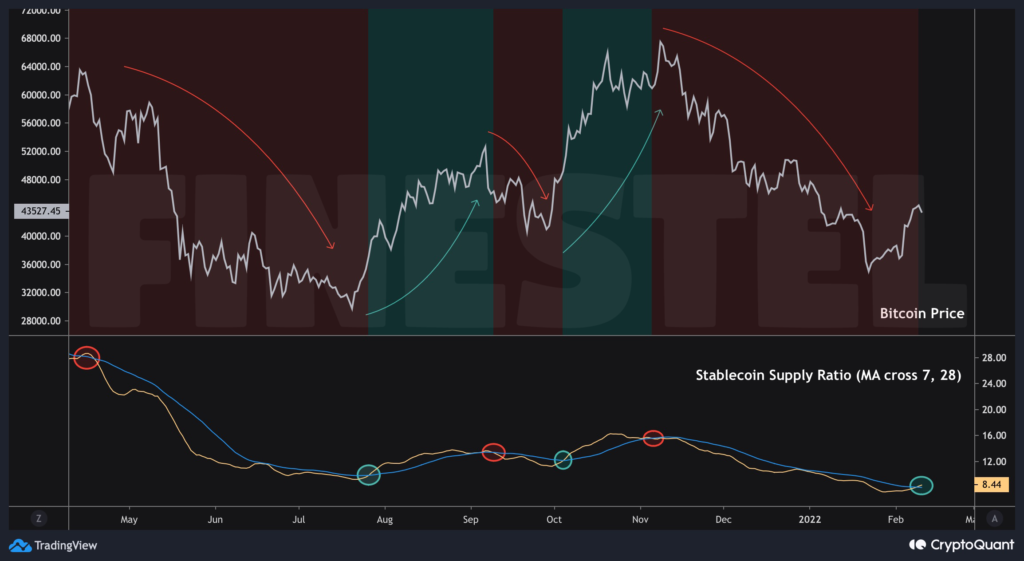 The chart illustrates the price of Bitcoin (white), the 7-day moving average (yellow), and the 28-day moving average (blue) of the Stablecoin Supply Ratio. The SSR measure is computed by dividing the market capitalization of Bitcoin by the total market capitalization of all stablecoins. SSR indicates when there is sufficient liquidity to purchase into the market, or, on the other side, when purchasing power is insufficient to propel the price up in relation to BTC’s market cap.

Potential bullish and bearish waves have been identified with reasonable accuracy using the MA Cross indicator during the last year. SSR MA Cross has finally shown a positive signal after a few months of correction, perhaps signaling the conclusion of this negative phase. Of course, this signal alone should not be used to make decisions, but it has been shown to be quite valuable in recent months.

Historically, when the metric reaches the green zone, it suggests that there is more buying pressure and that it is a good time to purchase BTC, while when it reaches the red zone, it shows that there is more selling pressure and that the price is likely to begin a correction phase. Right now, the metric has reached the green zone. Hence, there is a high possibility of a further increase in the short-term period.

Usually, a bearish trend ends with a period of capitulation from weak hands and a strong accumulation from strong hands. If we compare the recent bearish trend, which has started from the $69,000 ATH, with the previous bearish trend in May 2021, there are many similarities. The STH SOPR, which might be an indicator of the weak hands, was below 1 for a long time, indicating capitulation sentiment from short-term hodlers, while the LTH SOPR was above 1, indicating long-term hodlers’ hodling/accumulation behavior.

Back in May 2021, the price started a powerful rally from $29,000 and the STH SOPR finally crossed 1 confirming the capitulation is over and hope is back to the market. We have the same situation right now and the capitulation phase might be over. 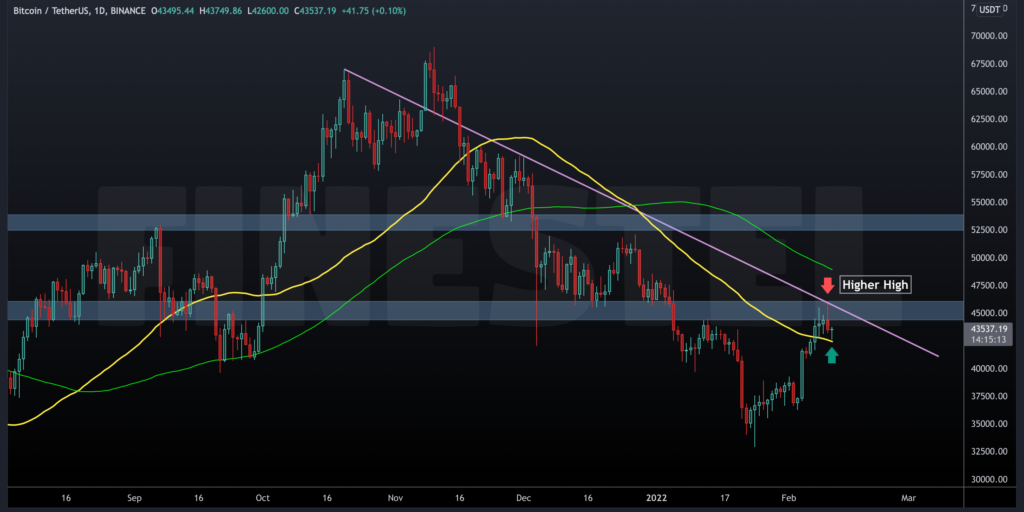 With some strong daily green candles, BTC has begun a bullish rebound from $37,200. The bullish momentum has decreased, as seen in the chart, and the price was rejected from the dropping purple trendline and the $45K resistance zone on February 10th. Currently, the price is in a corrective phase and is testing the broken 50D MA in the form of a pullback.

BTC, on the other hand, has finally achieved a higher high after a protracted bearish trend, raising the prospects of a trend reversal event. To complete the healthy reversal scenario, Bitcoin must make a higher low during this corrective phase. 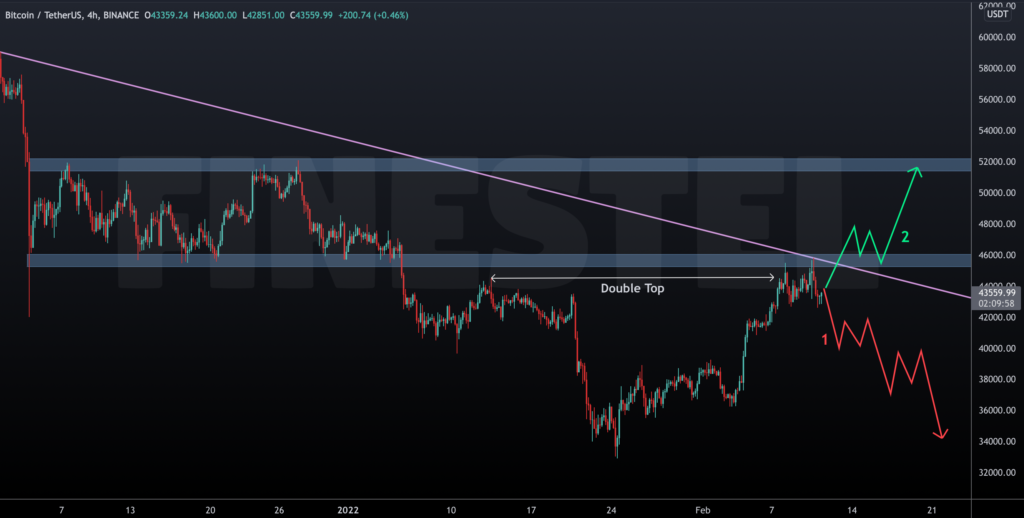 After hitting its prior critical pivot and the $45,000 resistance region, the price formed a double top price action pattern in lower time frames, which is a common bearish indicator. There are two possibilities here:

1) As previously said, the price will be rejected from this resistance zone, continue to correct, and drop to lower price levels, forming a higher low.

2) The price will be supported, breaking the trendline, and then continue to rise to new highs. It’s important to note that the next price resistance level is about $52,000.

The first option is the most likely, given the double top pattern and waning bullish momentum.