During the last week, Bitcoin’s price has experienced a $10,000 drop due to the long liquidations and FUDs from the United States government.

On Monday, U.S. President Joe Biden signed the more than $1 trillion bipartisan infrastructure bill into law, which the US congressmen introduced to modify crypto tax provision in infrastructure law. The recent price drop was caused by the long liquidations driven by this announcement.

Jack Dorsey, co-founder and CEO of the San Francisco-based financial services and digital payments company Square, released the whitepaper for its upcoming Bitcoin-focused decentralized exchange on Friday which is a peer-to-peer token swap platform under the oversight of Square.

Staples Center, a multi-purpose arena that has been home to many public events including boxing and basketball competitions, as well as concerts and hockey, also the home of the NBA’s Los Angeles Clippers, Los Angeles Lakers, the NHL’s Los Angeles Kings, and the WNBA’s Los Angeles Sparks, will be renamed to Crypto.com arena. According to an announcement, Crypto.com has purchased the naming for $700 million over 20 years.

Binance CEO Changpeng Zhao has revealed that Binance US, the US branch of the world’s biggest crypto exchange, is considering a public offering to raise a couple hundred million dollars. However, official confirmation is expected in “about a month or two.”

Nayib Bukele, the president of El Salvador, which is the only country where Bitcoin is a legal tender, said in a Saturday night presentation that he is going to build an entire city based on the largest cryptocurrency, Bitcoin, by using $500M of planned $1B bonds to buy more crypto.

The chart above depicts the Puell Multiple and the price. The Puell Multiple is defined as the ratio of the issued coin’s daily value in USD divided by its 365-day moving average, providing an oscillator derived from miner profitability and income stress. This indicator studies the profitability of miners and examines whether or not miners have a strong incentive to liquidate their treasuries.

As can be seen, historically in price tops, the Puell Multiple had reached higher levels and registered a major high. We are currently at the same level as when we first broke the $20,000 level and began a rally to $65,000. Each time the Puell Multiple reached this level, we saw a great bullish rally, as indicated by the yellow arrows.

On the other hand, if we compare now to the last time we were at these levels ($65,000 zone), we can see that the Puell Multiple is far below the top it made when we were at the  $65K zone in April 2021, implying that the incentive for miners to sell their coins is low, and they are expecting higher price levels to liquidate their treasuries.

The chart above compares the MPI (Miners’ Positions Index) indicator to the BTC price. The MPI indicator is calculated by dividing the number of all miners’ outflows in USD by its 365-day moving average. This indicator was inspired by the Puell Multiple.

Lower levels of this indicator (Green Area) are typically seen in bear/early bull markets, indicating decreased miner activity and sell pressure. According to the chart, we have seen price tops each time the MPI reached higher levels (Red Area) and registered a top, especially at the end of the bullish cycle.

As you can see, even though BTC has recently been on a rally and even reached higher price levels, the Miners’ Position Index is currently in an area that has historically coincided with bear markets. This behavior shows that miners, the market’s most important players, are not taking profits at the same rate as in previous bull markets. They are undoubtedly anticipating higher prices. 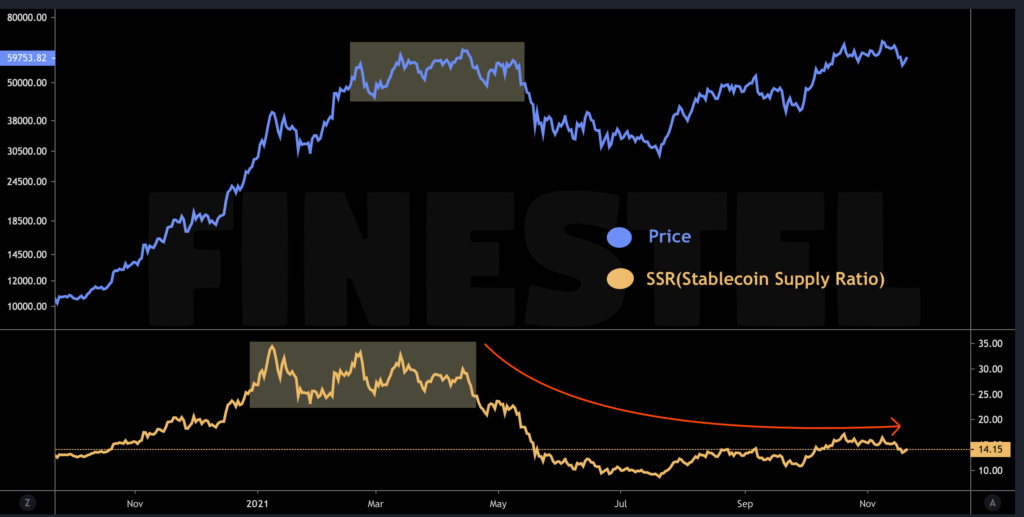 According to the chart, this indicator has been in a downtrend since the major crash in May 2021, and even though we are at the same price levels as we were in April 2021, when BTC registered a new ATH at $65K, the SSR is at lower levels than it was then. This demonstrates that stablecoin supply now has the great potential buying power to shoot Bitcoin to higher price levels.

This chart shows the number of long liquidations in relation to the price. As can be seen, the recent shakeout was driven by long positions being liquidated continuously (Yellow Rectangles).

Bitcoin reached a new all-time high on November 10th, following a $10,000 drop in price driven by long liquidations, FUD from the US, and a divergence between the RSI indicator and the price, as shown in the chart above (yellow trend lines).

Due to the recent shakeout, the price dropped below the 50-Day Moving Average (orange line) but has been supported by the blue trend line and is now testing the MA as a pullback. BTC is well above its 200-day moving average, which is currently around $46,000, and we have nothing to worry about as long as the price does not fall below this critical level.

As the 4H chart represents, the price is moving in an expanding wedge pattern which is mostly seen in Forex markets and it has recently experienced the third touch to the wedge (green arrow).

Due to the recent leg down, the price has changed the $60,000 support level into resistance; therefore, if we want to see higher price levels, BTC must make a daily close above this level and consolidate above it. Another resistance ahead of the BTC price is the blue trendline which has performed well as both resistance and support while the price has been in the wedge. It has to be mentioned that the most important support level for the price is the $53,000 zone which has been a valid support area in higher time frames for a long period.

As you know, price corrections are essential for a healthy trend. We can predict correction price levels using the Fibo retracement indicator. The most important correction levels in Fibo retracements are 0.5 and 0.618 and if we take a look at the chart above, we can see that the price has experienced a correction to 0.5 level of the Fibo.

It should be mentioned that the 0.618 level is exactly at the $53,000 zone, which we considered as an important and strong support area for the price. The 0.5 level itself is an important support level too and we expect it can hold the price above the $55,000 zone.

Ethereum reached a new ATH on Nov 10th, same as BTC, but it has been rejected since. According to the daily chart, ETH had been in a bullish ascending channel but due to the BTC’s price fall, it broke the channel downwards and experienced a $900 shakeout.

After the price decreased, the expected support zone, which was at the $3900 area, has done well and supported the price. The 50-Day Moving Average was exactly at the same level too which makes the level very strong. ETH doesn’t have any special resistance levels in its path to the recent ATH.